I suspect that the Portuguese colonizers of Bengal had no idea that their simple curdled milk cheese (the precursor of modern-day chhana) would one day create culinary wonders far beyond their own cuisine. The Bengali’s love for chhana, (often wrongly called cottage cheese in America) is so versatile that we eat it in every possible form. Apart from the gazillion sondesh or desserts made from chhana, Bengalis came up with savory things as well. Chhanar kofta, a curry made with spongy balls of this delicate wonder, is one among the Bengali niramish (vegetarian) favorites.

When I think about chhanar kofta, it especially amazes me because neither chhana, nor koftas is a native Bengali food. Chhana which is a descendant of a Portuguese cheese and kofta which was brought to India by the Mughal or the Persian colonizers are now an integral part of our cuisine. Koftas were traditionally made with meat and are very common in Persian or Middle Eastern cuisine. They are mainly made with minced or ground meat, seasoned with spice and herbs and made into balls. As Bengali widows were strictly forbidden from meat, they created their own highly evolved and richly complex vegetarian cuisine to compensate for their deprivation. Indeed, some of the vegetarian dishes created by these supremely skilled culinary artisans of a bygone era are more than a match for their meaty counterparts. For example, with chhanar kofta, if you have a highly developed palate and can appreciate subtle tastes, it is almost orgasmic when the delicate flavor of the chhana titillates some of your taste buds while the complex spices in the rich gravy are tickling the others. 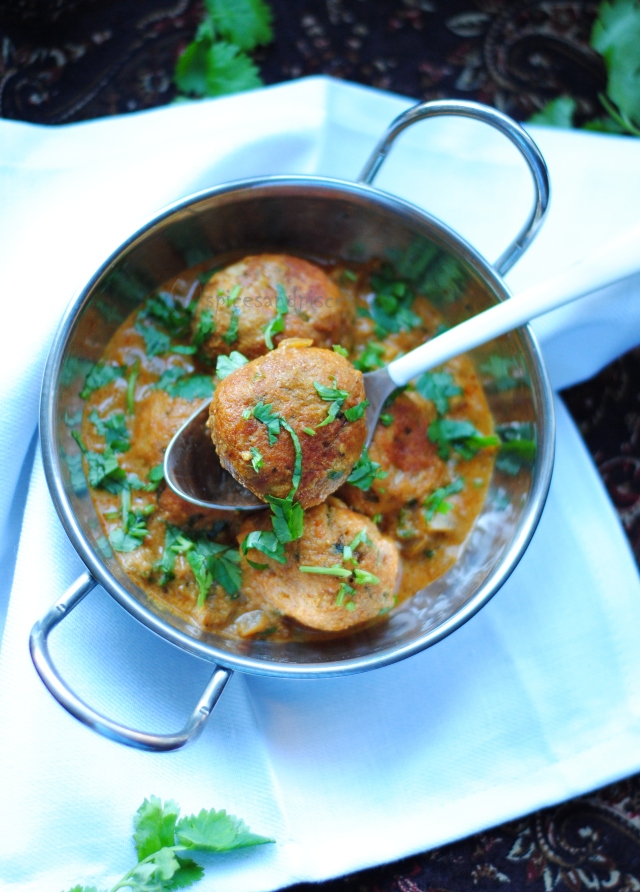 That being said, I have committed culinary heresy by creating a version of chhanar kofta with garlic and onions, but I feel compelled to share this with you just because I am a food iconoclast. Bengalis consider onion and garlic as non-vegetarian ingredients and a true vegetarian dish should not include any of these. The recipe I am sharing below is the pure outcome of my mood and whim. In retrospect, I shouldn’t have added the garlic as it imparts a strong taste which kind of steals the subtlety of the delicate koftas. The gravy tasted delicious but somewhere I could feel the garlicky flavor saying hello. Dr. Sen, on the other hand, had no problem with it apart from saying he was glad his grandmother died before eating this, so I think it depends on the person. The recipe below includes the garlic but you are most welcome to omit it (indeed, I encourage you to do this.). 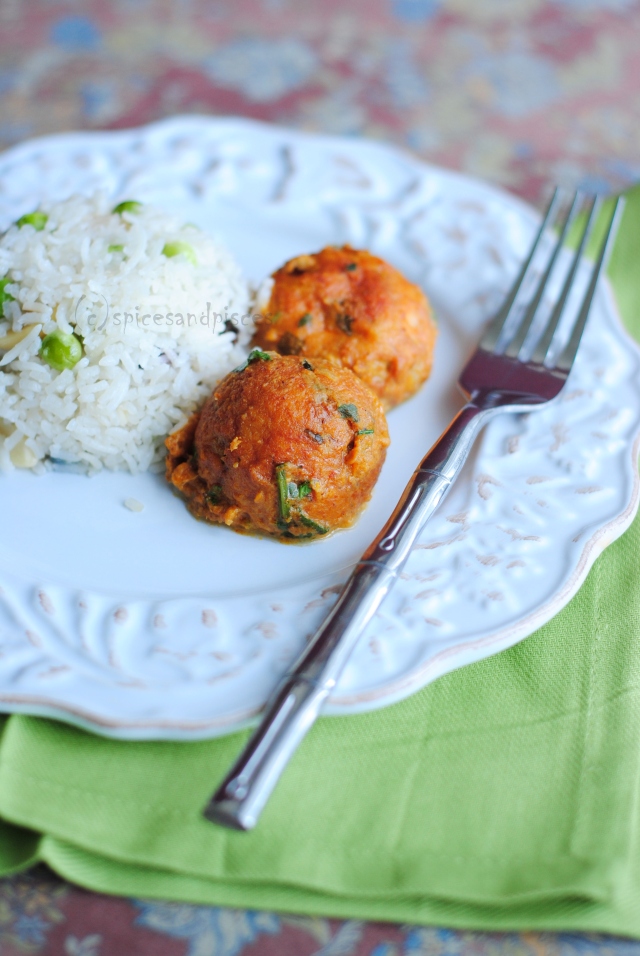 ** Do not make the gravy too thick or concentrated, the koftas usually soak up a lot of liquid. I usually put the koftas on the serving plate and then pour the gravy over it and let them soak for 10 minutes and serve. You can keep the gravy and the koftas separate and mix them a little before serving. If you put them together in the fridge, you’ll end up with no gravy and falling apart koftas the next day. 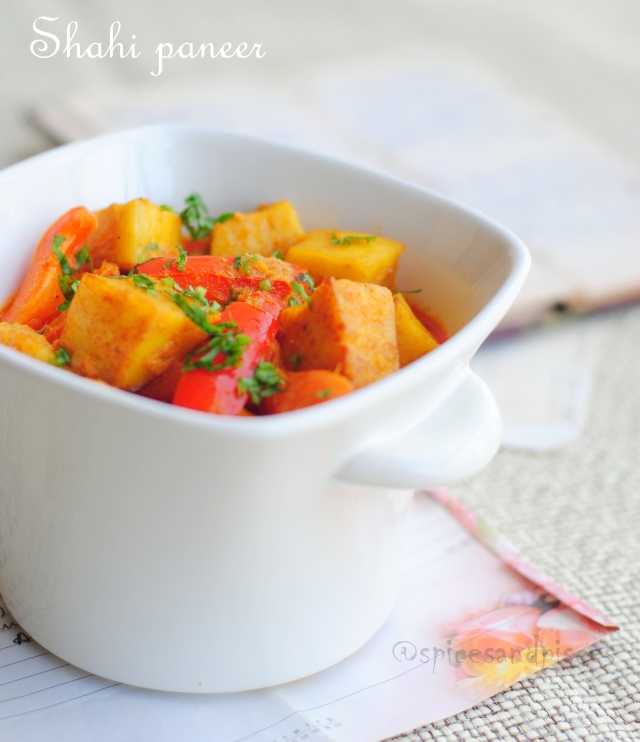 Long ago, my friend and I took a part-time job teaching people how to cook with microwave ovens. Ironically, at the time microwave ovens were absolutely new to me (and to Calcutta). I had only heard about them and may be seen them on TV a few times. Although they are still not a staple kitchen gadget, back then they were regarded as something rich people’s wives used for heating water quickly. Anyway, being desperately short of money, we took the job, no questions asked. A guy from the microwave company took us to a lady across the city in Ultadanga. We used to go to her twice a week and learn microwave cooking. She had 4-5 ovens in her kitchen from different companies. We took out our notebooks and with a serious face started our training. To give you a perspective, the only thing I knew before that class was to make an omelette. I lost my notebook but still have the one from my friend. I borrowed it from her while leaving India and never returned it to her (you know me…right).

The only two things I remember from the cooking classes are rui machher kalia (rohu fish curry with heavier gravy) and a paneer curry which she called shahi paneer. At the time paneer was unknown to my mother’s kitchen. It was just too expensive for us. We got to taste a little bit of the cooked food we made after the class, just enough to know what to expect. I totally fell for the paneer after that first bite, it became a life long love affair….yes I just love paneer now.

The real fun started after we finished our training and went to the first prospective customer’s house. We were asked to tell the people to have the ingredients ready beforehand so that we can save some cooking time. They were vegetarian Marwari people so we asked them to have some paneer cubes and bell peppers ready for shahi paneer. May be it was my Hindi, may be something else, who knows what, but when we arrived, it was something very different. They had shredded the paneer to death. My knees went weak as I had no clue how to deal with it (remember, neither of us had a clue about cooking in the real world). Being both helpless and hapless, we called our teacher and asked for help. She suggested that we stuff the bell peppers with the paneer and then microwave them. Oh Lord…it was a life saving suggestion. We did that and to my surprise, they turned out to be really good and the customers liked them as well.

I can still feel that panic and do not want to go through that ever again in my life. My friend and I never called the company representative again and never showed up for the next assignment. I know it was not the right way to do it…but we were young and didn’t have the money or guts to do it the right way. So, here I am, stuck with the memory of a delicious creamy paneer recipe and a memorable (I hope) story.

Notes: If you do not have poppy seeds, don’t worry, you can skip it. The cashews and the cream will give the gravy the shahi taste. You can skip the cream and the cashews altogether and it will taste lighter but still tastes good. I didn’t add tomatoes and bay leaves so you can either add them or skip them as well. Play with it and see what you like to add and what you don’t. It’s a pretty versatile recipe; you can make it lighter or richer. The addition or subtraction of some or any spice will alter the taste and you can make something different each time.