Every year I miss Poila Boishakh, the festival of the New Year according to the Bengali lunar calendar. Poila Boishakh is the first day of the month Boishakh (approximately in the first week of April), but the summer is already scorching hot during the day. If you were lucky, there might be a slight breeze in the evening, cooling you down just a bit so you could wear your new clothes. A charming custom was that if you were a regular customer at any local store, on this day the shopkeeper would invite you to stop by and have a small snack (more here). In this way, the relationship was elevated above the purely commercial level in a way my local Wal-Mart manager would probably not understand.

Every year during my childhood, I went to various places from a shoe store to the grocer to the jewelry store with Baba. The icing on the cake was if any of the shopkeepers gave me a Maaza (a very popular mango juice drink in India) or a glass of raw mango sherbet/Aam panna. We invariably came back home with boxes of sweetmeats and Bengali calendars given by the stores (usually with a Hindu god or goddess on them). The moment we got back home, I’ll literally jump on those boxes and sort through the sweets I wanted to eat. I didn’t give anyone any choice. I would choose mine and then Baba and Maa would have theirs. The story became slightly different when my brother started voicing his opinions though. We would keep the boxes in the refrigerator and eat one or two every day. I would unroll each and every calendar and sort through them as well (I really liked the ones with a glossy finish). If a calendar happened to be in English, I would save it for my room. The glossy ones were usually given by the bigger stores and to the chosen customers. There would be goddess Durga on one with a different weapon in each of her ten arms, while Lakshmi would be showering her blessings on another. The “modern” stores were more secular and would sometimes put the Eiffel tower or the Taj Mahal on their calendars. On Poila Boisakh, we always took down the calendars from previous years and put the new ones on the wall. One went in the bedroom, one in the living room, one in my room and one with a God or Goddess went to my Maa’s prayer room. The rest were distributed. 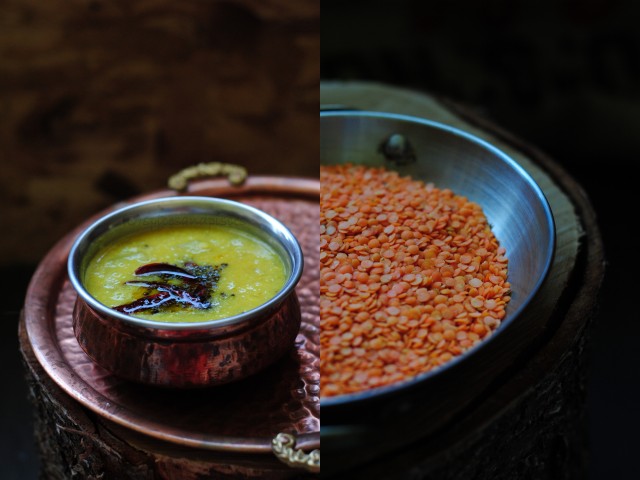 As Poila Boishakh was a day off for all of us, we used to have lunch at home. We ate simple things because it was hard to digest an elaborate or super spicy, greasy meal when the temperature outside was close to 40C. Among other things on the menu, tok daal (sour lentil soup) was a must. Green mangoes were abundant in the market during that time, and as Ayurveda holds that they have a cooling effect on the stomach, the tok daal with green mango slices was a regular in our house throughout summer. Making tok daal either on the Sankranti (the last day of the year) or on the New Year day is a tradition from my Dida’s (maternal grandma) time. When I called my Maa a couple of days ago and said we will have a small get together at my place and I will cook daal, Maa said “ki daal banabi, tok daal?” (What are you making, the sour lentil soup?). After that, there was no going back: I had to cook it right away.

Green mango (has to be very sour): ½ of a big one or one small (depending on how sour you want it and how sour the mango is), chopped into ½ inch pieces.

Mustard oil(any other oil will do too but not optimum): ½ tbsp. 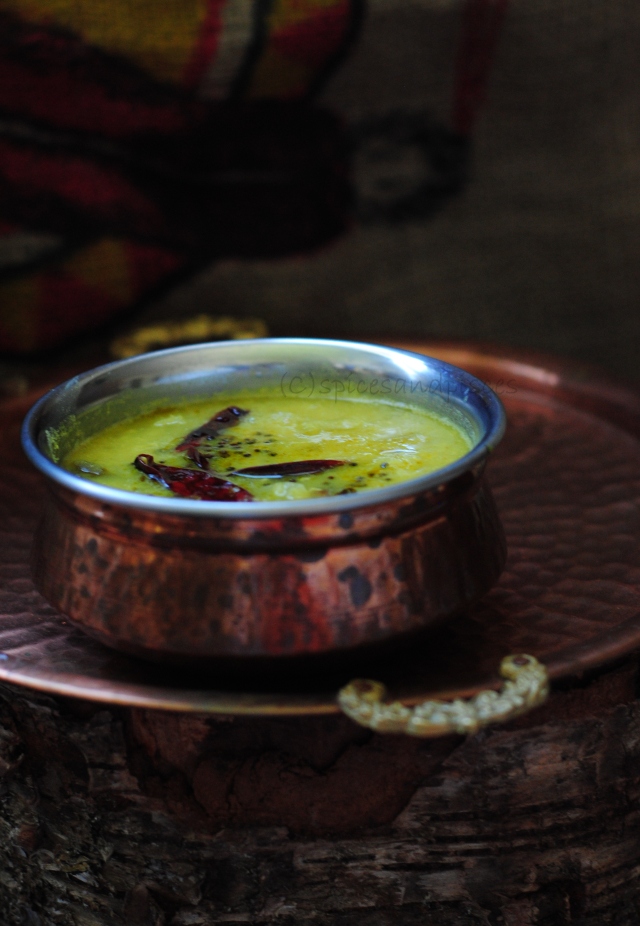 Optional: Add few curry leaves once the mustard seeds start dancing followed by the dry chilies. Or, follow this seasoning.

It’s not poila boishakh (start of the lunar Bengali year) but this aam-porar shorbot takes me back to my childhood memories of that day. On poila boishakh every store opens a new account book (haal khata) to record the coming year’s sales. At the same time, they balance and close the previous year’s books. Regular customers are invited to stop by and treated to sweet and savory snacks (no doubt softening their minds before they are politely asked to pay their remaining debts to the storekeepers, which is a big help to the book-keeper who has to tally the credits and debits before the day is done). I don’t know much about the state of this custom nowadays, but when I was a kid, it was a pretty big deal. We got invitations from several different stores ranging from neighborhood grocers to cycle stands. To many of you cycle stands might be a new term, but not to people who used to or still commute daily from the suburb to the city for work or to school. These unique establishments were essentially valet-assisted bicycle garages right next to the suburban (or “local”) train stations. We parked our bicycles there and boarded the trains. There was a monthly rate which was cheaper than the daily rate. It was amazing how they knew almost every customer and their time of commute. They would park the bikes according to your time of arrival so that they don’t have to go through the entire lot to find your bike when you came to claim it. They used to get a little pissed off if you arrive at a different time than your usual time (if you had to do this, they preferred advance notice). This made sense, as you broke routine, they literally had to move hundreds of cycles packed like sardines in order of approximate return time to extricate yours. 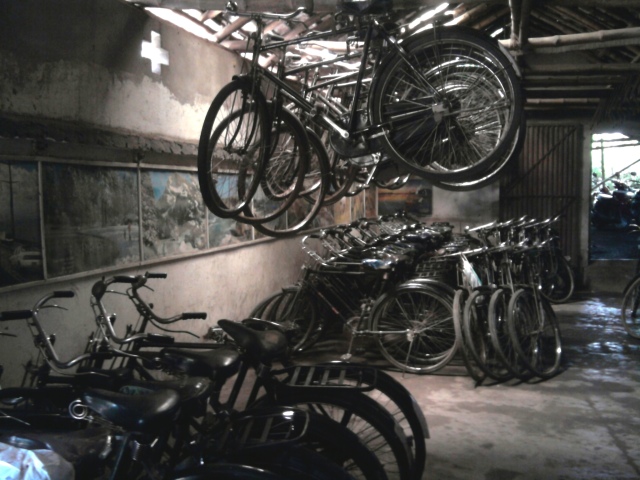 When I was a kid, there were only a couple of cycle stands next to the station. Among them was Khan Cycle Stand, a large and pioneering establishment where my Baba used to park his bicycle every day. Being a veteran customer, he got the ‘haal khata’ invitation every year. Poila boishakh is usually around April 15th, when the summer has started showing its furious temper. I was an only child for a long time and used to accompany Baba to the stores. Among many other poila boishakh memories, the one which sticks in my mind like yesterday is the taste of the aam-porar shorbot served at Khan Cycle Stand every year. We never had aam-porar shorbot at home. Poila baisakh was the only day we had it and it tasted like heaven. After so many years, I wanted to recreate the aam-porar shorbot at home. I wish I could do it on Poila boishakh, but life in the United States does not always allow for such indulgences. I don’t think I can recreate the exact taste of that particular shorbot, but it tasted very good. Nostalgia always makes things taste better anyway. So, here you go, a small sip from a glass full of my childhood memories.

There is as such no exact measurement. I am giving you the recipe and you can adjust your portion.

All you need is a couple of green mangoes, black salt, roasted cumin-coriander-red chili powder and sugar. Oh! And few ice cubes if you want it to be chilled.

Roast the mangoes on open fire, either on stove top or on charcoal. Roasting it in the oven might not give you the best result but if you cannot make it any other way, go for the oven. Roast the mangoes until the entire skin changes color becomes almost yellowish and feels mushy when touched. Cool it off and peel the skin. Scrape off the pulp and keep it in a container. I scraped it with a spoon. It gets really messy but it’s well worth the mess. You can keep the pulp in the refrigerator for few weeks if there is no water and the container is tightly closed.

When you want to prepare the drink, take a couple tablespoon of the pulp, add water, sugar and the black salt and give it a good stir. Check for seasoning. Keep it in the fridge for 15-20 minutes or more to chill the drink. Take it out, add the roasted powder, few ice cubes and drink it. If you use ice cold water, you can avoid the chilling part. Trust me, it tastes heavenly on a hot summer day.