Just as the chicken nuggets sold at McDonalds barely resemble real chicken, the modern chicken is about as different as can be from its ancestors. It might be a little bit of a stretch for the imagination, but you must believe me when I say that mighty dinosaurs are the forefathers of the humble bird you see today. Trust me on this one – I’m a zoologist. Of course, they didn’t just change in one jump – the immediate ancestor is the red jungle fowl, from which the chicken were domesticated by early humans. As wild fowls were inefficient flyers, domesticating them was much easier compared to other flying birds. Anyhow, the modern day chicken ultimately turned out to be a mix of several fowl species and it’s hard to pinpoint the actual lineage.

Possibly explaining the continued love of Indians and Pakistanis for tandoori chicken, Lothal, which was a port city in the Indus Valley civilization is believed to be the birthplace of the domesticated chicken. Eventually, it traveled to eastwards to China and westward to the Mesopotamian civilization. The “royal bird of Meluhha” described in ancient Near Eastern texts around 2000 B.C. most likely refers to chicken, which although commonplace today, at that point was still an exotic bird imported from Indus Valley.

Would you believe that people once bred chickens but didn’t even think about eating them? Although it’s now a staple protein the world over, chickens were not originally domesticated to be used as an edible meat. Instead, they were mainly used for divination and cock fights. Anyhow, they were the essential compromise candidate in Indian cuisine because both Hindus (who would die before eating beef) and Muslims (for whom pork is an even bigger no-no) settled on the tender white flesh of the poor chickens. But this took a while, and up until fairly recently chickens were considered inedible by Indians irrespective of religion. Among many possible reasons, one theory goes that chickens were scavengers and grazed the ground for mostly insects, worms and seeds, and were hence considered dirty animals. It was forbidden to the Hindus so recently that even Dr. Sen’s grandfather had to hide and eat it with friends in the mid-1930’s.  Although duck, geese, pigeons and other wild fowls were mentioned in Mughal cuisine, chickens were excluded from Akbar’s inventory. As such, it’s somewhat hard to know when exactly the “forbidden” chicken left the cockfighting ring and entered the domestic kitchens in India. In a fatal role reversal for the poor birds, the Egyptians are thought to bred them only for the eggs, but the Indians took the meat and ran with it. 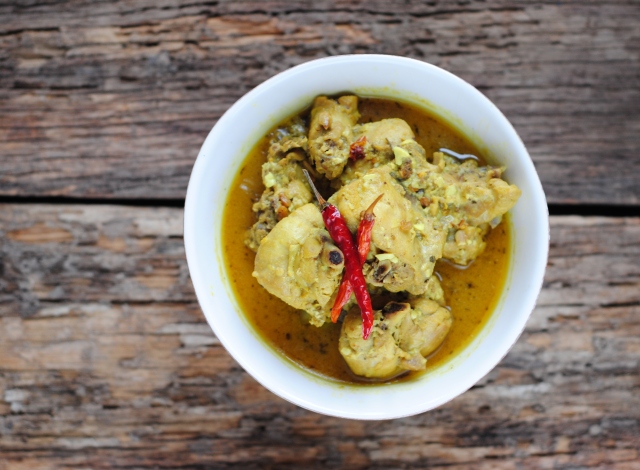 This Lasooni curry is a very simple chicken curry made with few ingredients. It’s loaded with garlic and truly justifies its name (lasoon or lehsan is garlic in Hindi). As garlic is considered to be heat-inducing by Ayurvedic principles, this dish is perfect for winter menus. The kasuri methi or dried fenugreek leaves give it a smoky touch with a very slight hint of bitterness. The yogurt balances the garlic and the bitterness taste and gives the gravy a mildly tangy taste and velvety body. Best served with hot rotis/fulkas, but eating it with rice is not a bad option either.

Dried Fenugreek leaves on the left

This recipe is tweaked from here.

Garlic: 3-4 fat garlic cloves, minced very finely or make a paste of it

Green chilies: 4-5 (depending on how hot you want your chicken)

Mustard oil/White oil: 2 tbsp. (I use mustard oil by default in my Indian cooking unless there’s a reason not to. But feel free to use your favorite oil) 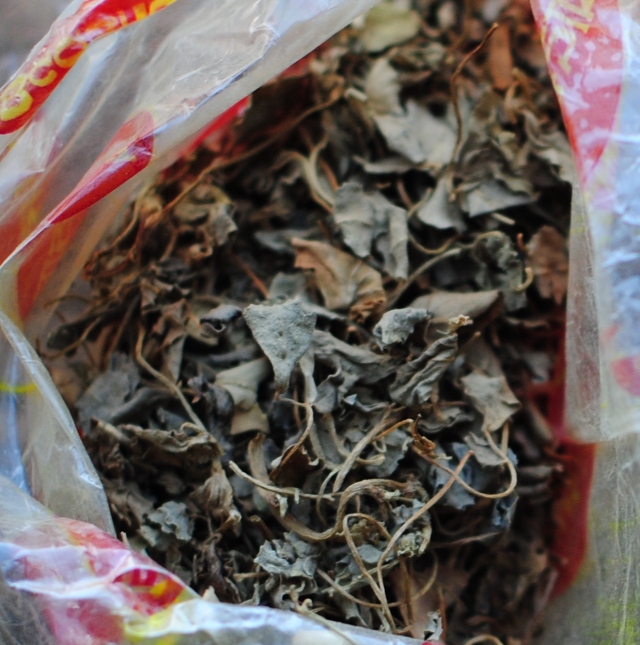 4 comments on “Lasooni Murgh/Chicken cooked in a garlicky sauce: Cooking with the once forbidden meat”