I didn’t pay attention to what we eat and do not eat while I was in India. All I knew was that Hindus don’t eat beef and Muslims don’t eat pork. In any case, I never had the chance to eat these “forbidden” meats for almost my entire life back home. After I met my omnivorous boyfriend (who is now my husband), I started exploring beef and pork. They were still not my primary choices; I can almost count the number of times I ate them before moving to the US.. Stateside, I faced the usual questions many, many times – “Are you vegetarian?” “Do you eat meat?” “Do you eat beef?” “What about pork?” I don’t blame them. We Indians are tricky when it comes to eating habits and food taboos. 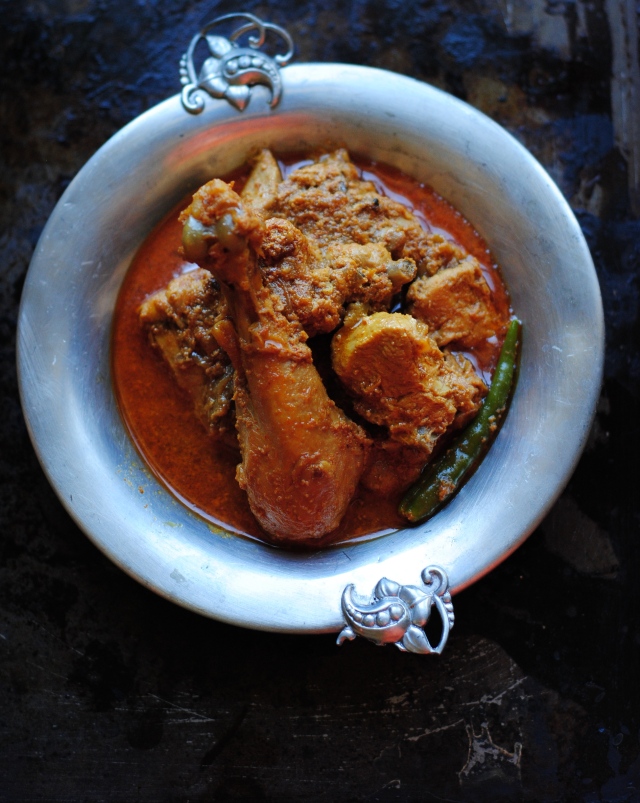 Food eaten in India is as varied as it can get. At a broader level, culinary choices are largely dictated by religion, although even within each religion it gets really complicated because there is no “one rule fits all” concept. Although eating beef was not a taboo in ancient India, Hindus are forbidden to eat beef and consider cows to be sacred. The prevalent hypothesis posits that the ban on cow slaughter reflects the dependence of the contemporary agrarian community on cows for their ability to till the soil, pull carts and produce cow dung for use as manure. The pre-Aryan concept of ‘ahimsa’ (non-violence) practiced by Buddhists and Jains may also have influenced the Hindus at some point. Also, cows were the main source for milk, which by analogy with motherhood gave them the elevated status of ‘gomata’ (go=cows; mata=mother). By extension, in Hindu society, cow slaughter carried the unimaginable stigma of effective matricide. The incipient taboo was greatly reinforced by the Muslim invasion of India. As Muslims ate beef without compunction, from the Hindu viewpoint, it came to be strongly associated with the “other” religion, completing its banishment from even marginally observant households. Indeed, even today only very liberal/Westernized/atheistic/depraved families (such as my in-laws; not saying which of the four they are) would routinely serve beef at their table. This of course does not mean that the younger generation does not eat it on the sly, as I did at Olypub with my boyfriend. He of course, ate mainly beef, primarily as it was cheap and he was perennially broke.

Apart from beef, for many Hindus, meat and fish are considered to be Rajasic (stimulating the baser emotions of passion and excitement) or Tamasic (indifferent, dull and depressing) and are thus prohibited from consumption. Adding to the confusion, while chicken and pork were taboo (as the respective animals are scavengers), often eating goat or lamb was not prohibited. Eating pork is still a no-no for most of the Hindus but chicken has gained immense popularity. It has lost all its taboo and indeed, become the primary animal protein for the growing middle class.

This chicken recipe is very different as it uses beresta/fried onions as the flavoring base. The chicken gets a fiery red color from the fried onions and caramelized sugar. A little bit of extra effort will give you a beautiful robust flavor of smoky, sweet, caramelized onions. 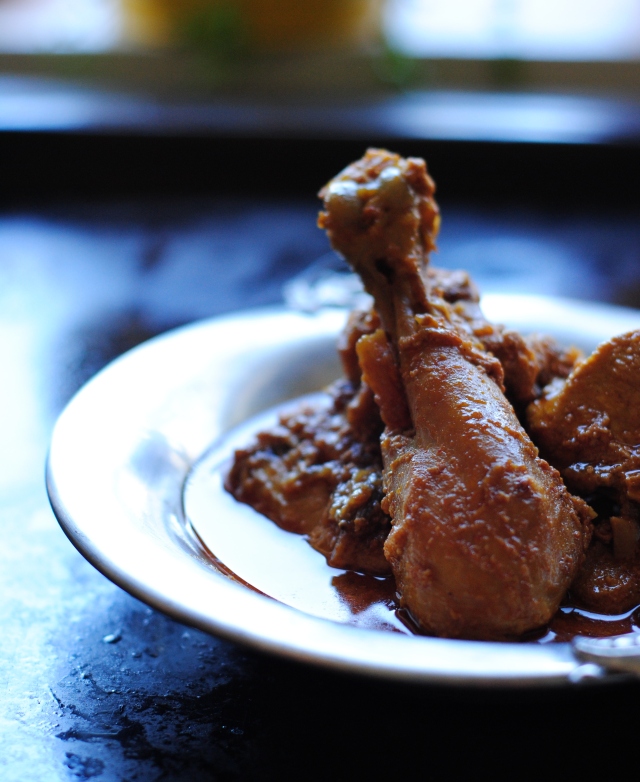 Ingredients:
Good quality chicken (if possible organic and free range): around 3 lbs. cut into bite sized pieces.
Onion: one large or, caramelized onion 2/3-1 cup. (adjust the number of onions to have around 2/3 cup of fried onions)
Yogurt: around ½ cup
Red chili powder: one tablespoon or more if you want it hotter (also it will depend on how hot the chili powder is) mixed with a little bit of water to make a paste.
Mustard oil/any other oil: 2tbsp. (you’ll need more oil to fry the onions, around half a cup)
Bay leaves: 2 nos.
Cardamoms: 3-4 nos. (smash them with a heavy spoon just enough to break them a little bit)
Garlic paste: 1-2 tbsp.
Sugar: one tbsp.
Cinnamon: 2 inches stick broken into one inch pieces

• Marinate the chicken with the yogurt and garlic paste for an hour.
• In the meantime, heat up around ½ cup of oil. Bring the flame to medium high to medium.
• Thinly slice the onion and fry the onions in the hot oil until golden brown. Do not make the oil too hot, it will burn the onion. Carefully stir the onion while frying to evenly color them. Slow frying will make the onion very sweet and smoky.
• Drain the fried onions on an absorbent paper.
• Take out all the oil leaving only one-two tablespoons.
• Add the sugar and let it caramelize. Keep an eye on it, it’s very easy to burn sugar and it will taste bitter.
• Once the sugar is caramelized, add the red chili paste and stir frequently.
• Drop in the cardamoms and the cinnamons and let them release the aroma.
• Turn the flame to low or take the pan out of the flame and then add the marinated chicken.
• Stir everything together very well or else the yogurt will curdle.
• Salt and again mix everything well.
• Add one third of the beresta (fried onions), mix nicely and then cover the pot.
• After around 10 minutes, uncover the pot, add another third of the beresta, mix well and cover the pot again for around ten minutes. Check the meat too.
• Uncover the pot, give everything a good stir and check if the meat is done or not. Check for seasoning too.
• Add the rest of the beresta, five-six green chilies slit length wise and then cover the pot again. Turn off the flame. Let the pan covered for 10-15 minutes (or more) and then serve with either bread or rice.

** I did not add any water. The chicken and the yogurt released enough water to make a nice gravy. If you think you do not have enough gravy, add little bit of water while adding the second batch of beresta.
**If you let the chicken sit for at least half n hour, the meat will soak the gravy a little bit and the flavors will mix very nicely.