Indian cuisine, from before and after the Muslim invasion, is significantly different. The Islamic rulers came in two successive batches. The first Muslim invaders came during the eleventh century and ruled under the name of Turkish Sultanate/Delhi Sultanate until 1526. They were mainly of Turkish and Afghan origins. The last ruler named Ibrahim Lodi of the Delhi Sultanate was defeated by Babur who came from central Asia in 1526. The central Asian Muslim rulers were known as Mongols which then got converted to the word “Mughals” and subsequently the British made it “Moguls”. Roughly speaking, India saw seven hundred and fifty years of Muslim rule, from the first invasion by Mahmud of Ghazni in 1001 to the Battle of Plassey in 1757 when the British were becoming de facto rulers. During this extended period, there was a huge amount of cultural exchange between the original inhabitants of the subcontinent (both Aryan and Dravidian) and the newcomers from Afghanistan, Turkey and Central Asia. Nothing escaped the Muslim influence – arts, crafts, music, literature and most importantly (to me at least) food. The Mongols, being not far removed from their nomadic roots, were known for quickly fire-grilled meats with very few spices and for adding dried nuts and fruits to their rice (pilaf or pulao). Additionally, reflecting the arid landscapes of their Central Asian homelands, their food was not known for being cooked with lots of water. On the other hand, India was not used to kababs and pilafs but exposed the Mughals to lentils cooked as a soup (daal) rather than the dry lentil salads of their homeland. Further variety came to the Mughal kitchen courtesy the thousand fragrant spices known to Indians since the Vedic era.
The coexistence of two distinct cultures gave birth to a proto-“fusion cuisine”, still popular today as “Mughlai cuisine” in India. Although the Mughal influence is very strong, if you reflect for a second you can see that it’s still a true hybrid of two cuisines. For examples, as I mentioned earlier, daal/lentils were a new thing to the Muslims and they gradually incorporated different types of lentils to their cuisine. Daal gosth is another example of the complex cultural integration that has shaped and continues to shape the magical land that is India.

Although it is assumed that Vedic Indians might have cooked a somewhat similar form of pilaf (which didn’t include dried fruits and nuts) and also animal sacrifice and grilling meat was common among the Hindu Kings, they were not common food eaten by every Indians.

(See the notes below)

Red chili powder/Cayenne pepper: 2-4 tsp. (depending on how hot you want)

Green chili/Jalapeno: 2-3 nos. (may vary according to your taste)

Chicken/lamb/goat meat: 2-3 pounds. (I used goat meat, bone in but the original recipe calls for chicken)

·         Grind the ginger and garlic to somewhat a paste. Add the red chili/cayenne pepper powder and turmeric to it and mix well.

·         Once the daal is cooked completely, mash it with the back of a spoon or lentil stirrer (the traditional one). Keep it aside.

·         Once the onion turns translucent, add the ginger-garlic-turmeric paste mixture. Sauté for the mixture for 5 minutes and then add the tomato.

·         Cook the entire mixture for several minutes until the raw taste is gone and oil starts leaving the spice.

·         Add the meat pieces and cook until the spice coats the meat very well and the entire thing turns into a deep reddish golden color.

·         Uncover and add the daal, whole cumin seeds and the green chilis/jalapenos.

·         Let it boil on medium high heat until the meat is completely cooked and the sauce reaches the desired consistency.

·         Once done, add around one tea spoon garam masala, stir to mix and then cover until you serve.

PS: The original recipe calls for chicken but as didn’t have chicken at home, I used goat meat.

I haven’t roasted the mung daal but I would suggest you to do that. I am sure it will taste better as the daal will get a nice nutty aroma once dry roasted.

Store bought garam masala and freshly/homemade garam masala makes a huge difference. So if you have few minutes in hand, you can make it at home. You’ll thank me later.

I have another recipe of lentil and meat stew but it taste very different due to the difference in the lentil and spices used. Both of them will be/is a crowd pleaser as you can make a large portion and it is quite economical. 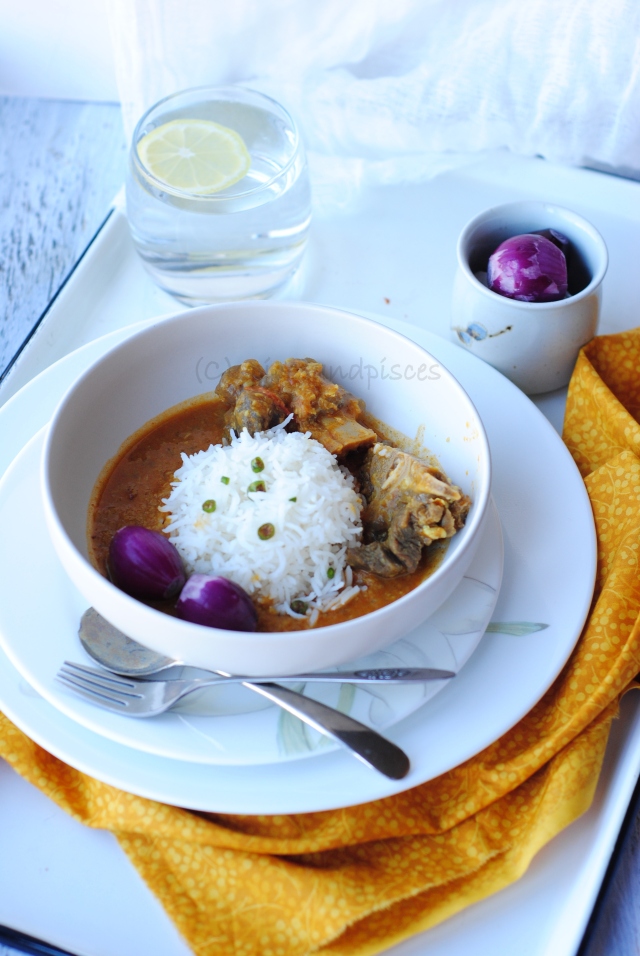 I have used rice to take the pictures because I didn’t have any energy left to make roti right after making the daal gosth. It goes best with any kind of Indian (naan) or flaky bread like the Iranian/Afghan breads. Definitely add a side salad and if possible a simple raita/pickle (Indian).

Optional: Sprinkle a few dashes of lemon juice to add a bit of a tang.

This was the day first photo shoot but I wasn’t happy with it. I am adding this picture to show you the texture and more of the actual daal gosht. 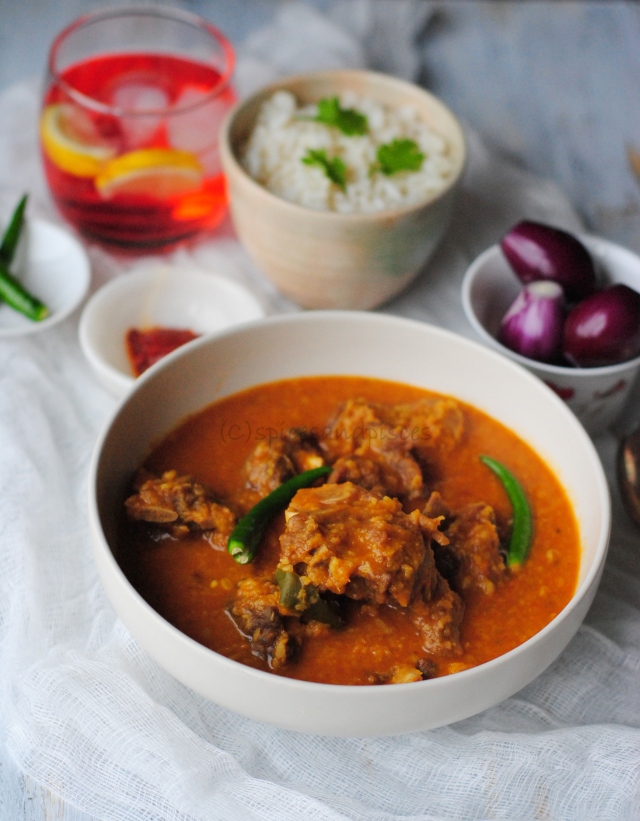 3 comments on “Daal gosht/meat and lentil stew, a shining example of an Indo-Muslim dish:”